Enter your email address to subscribe to this blog and receive notifications of new posts by email.

Out Of The Blue 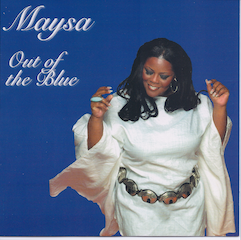 I’d like to shake the hand of the man or woman who talked CC Hills mayor, Dwight Welch, into creating this venue. The city doesn’t try to make the theater a multi-cultural one or have it encompass a variety of musical genres. It is what it is–a jazz and R & B venue. This summer alone, the lineup has or will boast, Toni Braxton, Freddie Jackson, Roy Ayers, Al Jarreau, Eric Benet, Bobbie Brown, Johnny Gill & co. as Heads of State, Musiq Soulchild, David Sanborn, George Duke, and Smokey Robinson.

Last night I had the pleasure of experiencing the show from row 5 of section B while award winning vocalist Maysa, and jazz musician Roy Ayers put on one heck of a show. Sassy Miss Maysa, as well as her one background vocalist and her band, was in good form. She performed her own hits, but paid tribute in song to Al Jarreau, Lionel Richie, and Angela Bofill. One interesting note. Maysa’s hit “Out of the Blue” was written for her son who she says came one night “out of the blue” at just 6 months. Maysa was on stage performing when her water broke.

Click on the link above the photo, “Out of the Blue” to hear Maysa perform the hit.

Roy Ayers was overwhelmed by the unexpected shower of love he received from the exuburant crowd. He and his musicians outdid themselves to pay us back, exciting the crowd even more. It was an emotional reunion. We sang along to songs like Running Away, You Send Me, Love Will Bring Us Back Together, and other hits. ” I like this”, Ayers said of the theater. “Country Club Hills. Humh, outside Chicago, but still close enough to be Chicago–but still not Chicago.”

I’ve been here before and WGCI personalities, Ramonski Love and Joe Soto do an excellent job of keeping the crowd entertained during the acts changing. As always, Great Job, Country Club Hills.

Old School Music of the Day

Fall Decorating on a Dime

When Did You Fall in Love With Hip-hop?

Old School Music of the Day